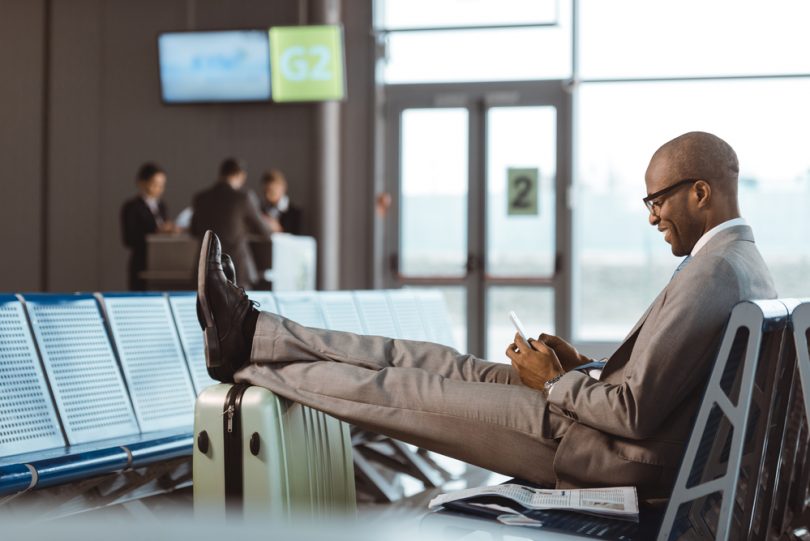 If you fly round trip from New York to Los Angeles and aren’t a member of that airline’s frequent flyer program, you’ll miss out on roughly 5,000 frequent flyer miles. More if you have a layover.

Three more of those flights, and you’ve already earned yourself a free domestic round-trip flight on some airlines.

If you pay for the flight with a good travel rewards credit card, tack on another 1,000 points for a flight that cost you $500. Combining miles and points is a great way to maximize award travel. Once you’ve flown enough with that airline, you’ll start achieving frequent flyer status. That leads to even more points for each flight, and on top of that, perks like free checked bags and free upgrades to business class.

With all of these perks, what’s the downside to signing up for a frequent flyer program? Well, there isn’t one! It’s a free loyalty program that gets you earning points and great rewards right off the bat. The question isn’t should you join, it’s which ones should you join?

Not all frequent flyer miles programs are created equal. If you’re going to pledge your loyalty to a few frequent flyer programs, you’ll want to do your research first so you can pick the best ones. Luckily, we’ve got you covered.

Here are the best frequent flyer miles programs currently on the market for U.S.-based flyers.

Southwest is known for having a frequent flyer miles program that is both the easiest to understand and the easiest to redeem. If there’s an open seat on a flight, you can always purchase it using miles, so you don’t have to worry much about availability. Their redemption is based on the price of the ticket, so it’s always fair. This means you’re not going to find crazy deals on flights that would otherwise cost a fortune, but you’re also not going to find that flights that should be cheap cost you 100,000 miles.

The real kicker for Southwest is their companion pass program. If you earn enough points in a calendar year, you get a companion pass that’s valid for the rest of that year and all of the following year. This pass allows you to designate a companion who flies for free with you on all of your paid and award travel flights during that time. That’s a perk that’s hard to beat, especially if you regularly fly domestically with a companion.

This one is going to depend on where you typically fly to. Certain frequent flyer programs are really good for award travel to Europe, for example, but not great for award travel to Asia, and vice versa. The airlines above work with a pretty extensive network of international partners. Both Delta and Alaska miles can be redeemed on Air France/KLM, which is a great airline for international travel to both Europe and the caribbean. Alaska partners also include British Airways, Cathay Pacific, Singapore Airlines, Qantas, and Emirates. Delta’s SkyTeam includes Hawaiian Airlines, AeroMexico, and Virgin Atlantic. United’s Star Alliance network includes Singapore Airlines, Oneworld, Lufthansa, ANA, Avianca, Copa, Air Canada, Air China, Air Portugal, and more.

For earning a free flight with ease: Alaska Airlines

This is the bottom line metric of a frequent flyer miles program. How easy is it to earn a free flight? To determine this, you’ll want to look at the value of each program’s points – if it costs you 25,000 miles to book a cross-country flight, and the price of a cross country flight is around $500, the points are worth $.02 each. The other thing you want to look at is flight availability on both the airline and any partner airlines they allow you to transfer your points to. It doesn’t matter if each point is worth $100 if you can’t find any available flights.

Alaska Airlines comes out on top in both regards. With points that are valued at roughly $.017 each, they have the highest value points system amongst all major airlines. On top of that, you can redeem Alaska Airlines points on a wide range of partner airlines, including American Airlines, Delta, Cathay Pacific, Emirates, and more.

For the best perks: Alaska Airlines

At almost every status level, Alaska Airlines’ frequent flyer perks take the cake. First of all, even with their lowest status level, you get a 50% bonus on all miles earned throughout the year. AT mid-tier levels, Alaska’s perks are still significantly better than other airlines. You get a 100% bonus on all miles earned, and you get fee waivers for flight changes and cancellations, even up to the last minute. You even get four upgrade coupons. Premium tier frequent flyers on Alaska still offers the best perks, although Delta starts to catch up with wider complimentary upgrade availability and complimentary preferred seating. United and Delta both offer great hotel partnerships at this level.

Finally, at the very highest tier of frequent flyers (which requires near constant air travel to reach), United and Delta actually perform much better than Alaska. Award availability increases and you’ll find yourself upgraded and offered complimentary drinks and snacks on many flights, domestic and international. Fee waivers and premium service are offered as well as global upgrade certificates. With Delta, you can gift Gold Medallion status to a friend, and with both Delta and United, you gain complimentary access to their airline lounges.

For the best coverage: United and Delta

If you’re looking for a frequent flyer miles program that is likely to offer award travel to all regions of the world at all times of the year, United and Delta come out on top. Both airlines operate over 2,000 flights per day all over the globe, and both United’s Star Alliance and Delta’s SkyTeam offer award travel on a wide range of partner airlines from every region of the world.

For miles that never expire: Delta

One important distinction to note is whether or not the miles you’re accruing expire. This is important if you’re saving up travel rewards on several different airlines. Perhaps you have 50,000 miles sitting around in one frequent flyer account and 150,000 in another, and it’s more convenient for you to use up the miles in the latter before dipping into the former. Well, if it takes you more than 18 months to do that, you might lose all the miles you have saved up with the former airline.

Most major airlines will allow you to keep your miles as long as your account does not go inactive. This means that you are either earning or spending points at least once within an 18 or 24-month period. The only airline on this list that offers miles that never, ever expire even if you don’t fly with them for years is Delta.

Elizabeth is a freelance writer and “digital nomad” specializing in small business, entrepreneurship, career advice, real estate, travel, arts, and culture. She’s written for outlets as varied as Rawckus Music and Arts Magazine, Itcher Entertainment, Sweden Tips, Houzz, Hometalk, JobHero, Tico Times, and Eugene Weekly. Thanks to a three-year stint in a travel job, a knack for mining great deals, and credit card churning, she has not paid for a single flight since 2012, despite her constant travels. You can find her on Twitter @LizzieAldrich or her website, www.elizabethaldrich.com.