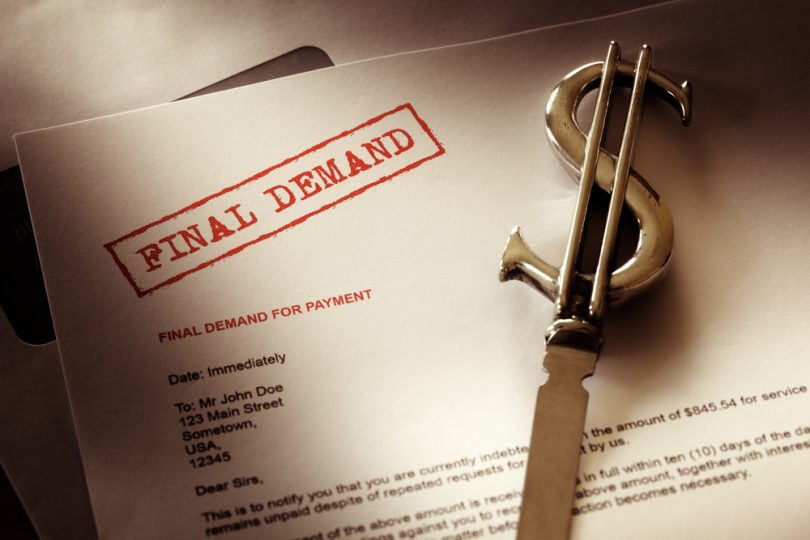 My almost 4-year-old does this thing where she puts her hands over her eyes when she does something wrong. She thinks that if she can’t see me that I can’t see her and what she is up to.

As an adult, you can quickly see how this is just not the case. Unfortunately, for her, I keep telling her to show me what she has or what’s she’s doing until she does.

Adults have a similar action when it comes to collection letters they receive in the mail. They think that if they don’t open it, don’t read it, if they just don’t “see” it, or just ignore it that they’re home free.

Well, that’s not exactly how it works.

Why You Might Think You Should Ignore Collection Letters

Sure, there are some perceived benefits to ignoring those collection letters that are landing in your mailbox.

In reality, there is really only one benefit. If you ignore the debt collector long enough then they’ll just go away, leave you alone, and the debt just fades into the sunset.

The reality of the situation is that this is not going to happen. Keep in mind that debt collectors get paid when they collect debts. This means that if they don’t collect your debt they won’t get paid.

It’s a huge incentive to keep them coming at you rather than to just ride off into the sunset and give you a happy ending.

Here are seven reasons why you shouldn’t ignore those collection attempts.

This is so important it’s worth repeating. There is incentive for a debt collector to continue to try to collect the debt. Remember, they only get paid if they collect money from you.

There is no incentive for them to throw up their hands and move on to the next, which probably means they are just going to continue to send you letters, call you, and do whatever they have to do to collect on the debt.

If you don’t have the money to pay off the debt, it’s easy to understand why you’re trying to dodge the collection letters and phone calls. Debt collection, however, is not always an all or nothing situation—meaning it’s not you have to pay off the entire debt or don’t pay any of the debt at all.

If you actually pick up the phone and respond to a collection letter, it is possible that you can settle with the debt collection agency for a lesser amount than you actually owe. You’ll never know, though, if you don’t have a conversation with them to see what your options are.

5. The Debt Can Grow

That’s right. If you continue to ignore the debt, all you are really doing is accruing interest and collection fees on top of the debt you already can’t afford to pay. You’re actually making it worse, in the long run, by ignoring the debt.

6. You Get Tossed to the Next

There are times when your attempt to ignore the collection letters might just work. That particular agency might give up trying to collect the debt. They sell your debt to another agency that then attempts to collect the debt. This can happen several times until the debt is paid, so it doesn’t really make the problem disappear.

Dealing with problems can be stressful but ignoring your debt problem can make your stress level even worse. You start to avoid getting mail out of the mailbox, your heart races when you see another collection envelope, and you want to just avoid it all.

Dealing with the issue can actually help to bring down your stress level because you’re facing the problem head on and doing something to correct it.

How to Deal with Debt Collection Letters

Now that we’ve determined ignoring debt collection letters is not the way to go, let’s talk about what you should do.

It’s actually a good thing that the debt collector is sending you information on the debt in writing. You want to have it in writing.

If the letter doesn’t already contain the information, contact the debt collector and ask them to send you the name and address of the borrower, the amount of the debt, the date the debt was established and, if possible, a copy of the original debt application or approval letter.

When you receive this information and verify that the debt is your debt, then contact the collection agency to try to work out some kind of an arrangement. Claim ownership of the debt and let them know that you want to pay your obligation.

Once you make an arrangement, make sure you keep up your end of the deal.

While it may seem easier to just turn a blind eye to those collection letters showing up in your mailbox, the reasons to deal with the problem head on far outweigh the one reason to ignore it.

Kristie Lorette McCauley is an award-winning expert on personal finance, mortgages, and credit. She has published articles on major finance and credit blogs, such as Yahoo! Finance, Quizzle, Money Crashers, and BankRate. She is also the author of books, such as How to Use the Equity in Your Home or Business Today to Invest for Tomorrow and How to Open & Operate a Financially Successful Personal Financial Planning Business.