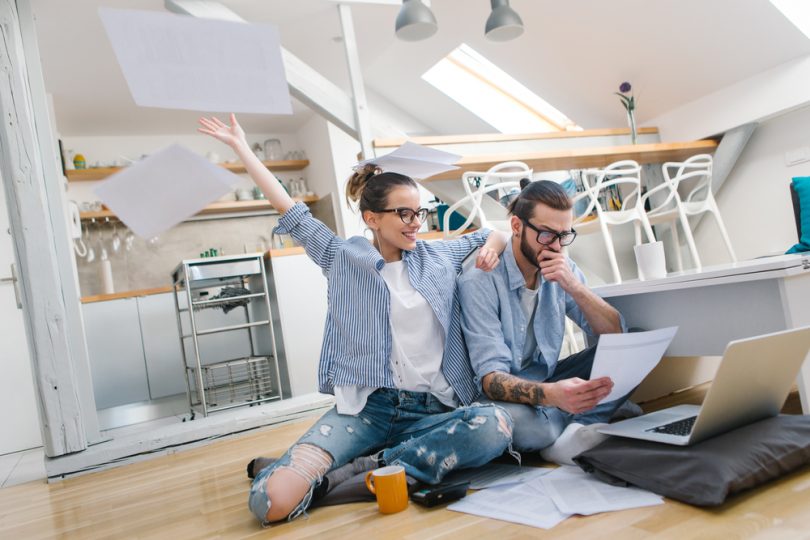 Paying down your debt is hard. When you’re up to your eyeballs in bills, it can be completely demoralizing to think about paying off a loan or trying to save any extra money for the future. Where should you even start when it comes to choosing which debt to tackle first?

This is where the concept of snowballing your debt comes in. If you haven’t heard of it, the debt snowball method is a way to pay down your bills that lets you focus on just one debt at a time. — typically the smallest one. To make it happen, you pay the minimum on all your debts except one, at which you throw all the spare cash you can to get ahead of the game. When that first debt is paid off, you take the monthly payment you had been spending to get rid of it and apply it — plus any extra money you can manage — to the next bill.

Rinse and repeat until you have paid off all your debt.

The main advantage of this system is that it keeps you organized because you can focus your efforts on one debt at a time instead of trying to spread your money over all of them or sticking to a complicated rotating scheme of payments. It’s also really good for morale to get rid of an easy, small debt first — and then you automatically have some extra money to put towards another bill, all without a major budget cut or picking up a side gig.

But does this method make the most financial sense? Or would you be better off starting with your biggest debt instead? How does the interest rate factor in?

Time to crunch the numbers.

For the sake of looking at the math, we’re going to start with Suzie Spendthrift, who has three major debts to get rid of. Here’s what she owes:

For this comparison, let’s assume that the interest rates on these debts are equal at 5%, and that Suzie is able to spend $50 extra each month to get rid of her debt. We’ll also assume her minimum payment on each loan is $50.

If Suzie begins by focusing on her smallest debt first, paying the $50 minimum and an extra $50 each month, she will pay off Debt A in only 6 months. (You can follow along with the math by entering the values in a line of credit payoff calculator.)

Now Suzie has an extra $100 per month (her original extra $50 plus the $50 minimum she no longer has to spend on Debt A) to put toward Debt B. Added to the minimum payment of $50 on Debt B, that means she can put $150 per month onto this bill. This bill has been reduced by $50 per month for the six months that she has been paying off Debt A, though, so she only has $1,747 to go when you add in her interest charges. Doing this allows her to pay off Debt B in 12 months.

The total number of months it will take Suzie to pay off her entire debt? 42 months — or three and a half years.

If you run this scenario backwards and start with a $100 monthly payment on Debt C, it will take 57 months to pay off. Debt B and Debt A would already have been paid off by this point just by paying the minimum, so there’s not much of an advantage to starting with the biggest bill as long as interest rates are the same.

How does the interest rate change things? Let’s look at Paul Profligate’s debts and terms:

Again, we’ll assume that minimum payments are $50 per month.

If Paul begins by focusing on his lowest interest rate first, paying the $50 minimum and an extra $50 each month, he will pay off Debt A (only 2% interest) in 21 months.

The total number of months it will take Paul to pay off her entire debt when starting with the lowest interest rate is 35 months — just shy of three years.

If you run this scenario backwards and start with a $100 monthly payment on Debt C, it will take 23 months to pay off. The balance on Debt B after that amount of time is still $1,028, so paying it off with $150 monthly payments will take an additional 7 months. Paying the minimum on Debt A all this time (30 months) leaves a balance of just $566. Paying Debt A at a rate of $200 per month will take 3 months. All three debts will be paid off in 33 months.

Paying off the larger interest rate first is faster than starting the lower rate. Two months may not seem like a big deal, but that’s an extra $200 in your pocket each month — and $400 is a good reason to plan carefully around the interest rates as you snowball.

To save money in the long run, it usually makes sense to pay down your highest interest rate loan or credit card first. It’s unlikely that you have loans that all have the same minimum payment, interest rate or balance, so it’s worth spending a half hour with a line of credit or loan calculator to play with the numbers. This will let you figure out exactly how long it will take to get rid of your debt depending on the order you pay them so you can make the right decision for your personal finances.