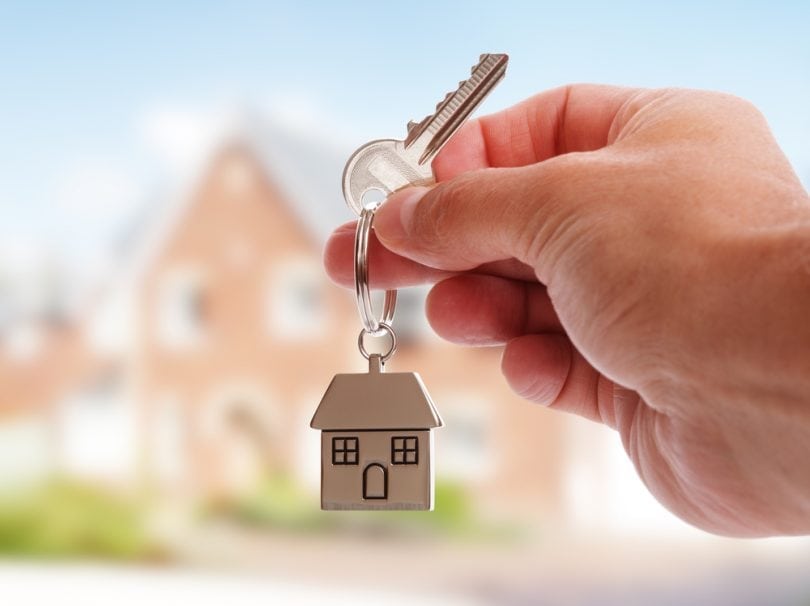 It didn’t take long to realize that I wasn’t cut out for apartment living. I’m an introvert at heart, so being surrounded by neighbors on two sides, plus above and below, was a lot. The couple whose apartment abutted our bedroom wall fought nonstop, while the family upstairs had two rambunctious girls who would practice their gymnastics moves in the living room.

But the last straw was a “house” party in the apartment below ours that spilled out into the hallway and up the stairs into our hallway. When they rolled their eyes at my polite request to keep it down a little, I knew I was done.

I thought it would take me years to save up for a house of my own, but I was out of that apartment and into a house of my own after only eight months on that first — only — lease. Here’s how I did it.

Before diving into tips, there are a few things you should know about me. First, things happened fast for me the year I bought that house. I graduated college a few days after my twenty-second birthday, and I was about six weeks later. By the end of the summer I had moved several states away (to the less-than-thrilling apartment I would grow to hate) and started my first full-time teaching job.

I had about $25,000 in student loan debt, which came to $234.42 a month (a number permanently seared into my memory). My husband, who wisely attended a state school, had no student loans. We both owned our beater cars outright as well, and carried no credit card debt.

I tell you this so you can see that we weren’t rich, though we did start life with a steady, if not stellar, income and a pretty clean slate when it came to debt.

When we woke up bleary-eyed the morning after our inconsiderate neighbors’ party, we started talking seriously about buying a house. We knew we definitely wanted to be homeowners, and now we were all in on accelerating our savings to make it happen ASAP.

To do this, our first step was to estimate what we would spend on a mortgage payment per month. We did some math with an online mortgage calculator based on interest rates at the time and average price of houses in neighborhoods we liked — but nothing that would be too far out of our league on the first go-around.

With that number sorted out, we took a look at what the monthly payment would be. In our case, that was about $1,200. That was almost twice as much as our rent, so we weren’t sure it was realistic to think we could afford that kind of cash outlay every month.

But you never know until you try, so that’s what we did. We started pretending we had to make a $1,200 payment every month. We tracked every penny to make sure we could make it happen, and when we paid our rent, we also slid an extra $500 per month into our savings account.

This accomplished two things. First, we learned first-hand exactly what it would take to afford that house (more on that in a minute). Second, we were quickly building a nest egg to reach our down payment by banking all that extra money each month.

When you force yourself to make a big (fake) mortgage payment every month, you learn very quickly how to live on what’s left over. We ate pretty cheaply by finding deals at the grocery store and cooking at home. In fact, we only rarely ate out during that intensive savings period, and when we did, we never spent any extra cash on alcohol. Our biggest nights out were just to the movies, and we spent a lot of nights in with equally frugal friends, sharing homemade treats and watching movies at home.

We also didn’t take any vacations during our trial mortgage period. Instead, we hosted visitors from out of state who wanted to get a look at our new hometown. We also gave up any thoughts of upgrading our cars or splurging on decorations for the apartment. After all, we were on a mission to get out of that place, so why bother sprucing it up?

Once we were convinced that we could really afford that mortgage payment every month, we were ready to talk to a lender. We didn’t know if they gave loans to people who were under 35, but you what? They do — as long as you look like a good risk. It turns out that we did, and not because we had just scraped together our 3 percent down payment in six months flat.

Without realizing it, we had already laid the groundwork for being financially responsible. Here’s what we had done in the time leading up to buying the house:

If you want to buy a house, you probably can — if you’re committed. The best way to test that commitment is to put yourself on the “live like you have a mortgage” savings plan and see if you can survive. If you can, use the extra savings for your down payment — or to pay down your debt, if your debt-to-income ratio needs work first. While you’re building your savings during your mortgage trial period, work on raising your credit score and building your frugality muscles so you won’t feel house poor when you finally do reach your goal.

It may take several months, but you can do it!