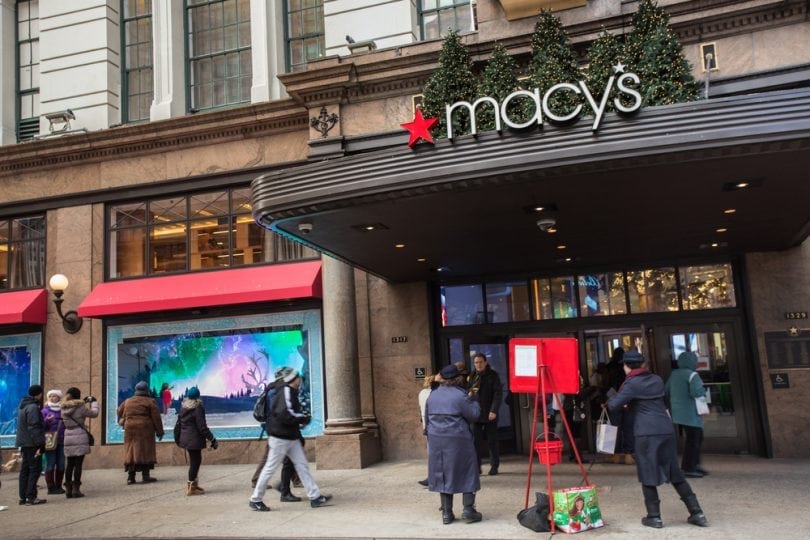 Let’s talk about department stores. You know, the big guys who used to be a mall’s best friends. Anchor stores like Macy’s, JC Penney and Sears were once staples in every big mall, holding down the ends of the shopping gallerias like lighthouses on the shore.

Today things are a little different. For example, Sears is barely hanging on, and many department stores have closed locations across the country as people have made the switch to online shopping instead of getting gussied up for a day’s outing to the mall. There’s also stiff competition from discount big box stores, which have become the new destinations for people looking to shop in person but still find everything they need under one roof.

Still, department stores solider on, and there’s something to be said for the sheer convenience of being able to pick up everything from lipstick to luggage in one place. The competition from all sides is forcing department stores to step up their game when it comes to offering deals, so they’re definitely worth a second look — particularly if you’re in the market for certain items. Here’s what to shop for the next time you’re at a traditional department store — and what overpriced items to skip.

Buy Small Appliances, Not Large Ones

If you need a toaster, waffle iron or a new vacuum cleaner, you just might find a good deal at your local Macy’s or other traditional department store. These chains have made a living for years on wedding registries, so the have a long history of offering popular countertop kitchen appliances at competitive prices as a gateway purchase. It’s also a good place to go to get a premium version of a favorite brand instead of a cheaper version they make for big box stores.

On the other hand, home improvement stores like Home Depot and Lowe’s have largely taken over the large appliance game, so traditional department stores — if they even still offer washers and dryers — are no longer a great bet for these items. The one exception is Sears, where you may be able to get a great deal if there’s still one operating near you.

In their golden days, department stores offered a full range of everything a well-dressed man or woman would need to step out in style: suits, shoes and accessories from cufflinks to crinolines. Hats aren’t an everyday fashion item for most people anymore, but if you need a lacy number with a veil for church, the department store is your best bet, since in many ways they still cater to shoppers of a certain age. It’s a also a good place to grab an inexpensive baseball cap for working out — you’re likely to get a better deal than you would at a specialty hat shop filled with licensed team apparel.

Not every thing you put on your head is a good deal at a department store, however. Headphones are both a hip accessory and a useful way to get more out of your electronics, but they’re rarely on sale at department stores, and they are unlikely to have a great selection in their typically bare-bones electronics sections.

The makeup counter at a traditional department store is still a destination for many aficionados, since you can get expert advice, test out all sorts of products and even get a makeover — something you definitely can’t do at the drugstore. Department stores often have generous return policies on makeup, and it’s the best place to get valuable freebies with your purchase. Combine that with some free samples, and you can get a lot for a little.

While the makeup counters offer department stores’ best customer service experiences, the mattress section is usually one of the worst. According to a Consumer Reports study, most people who bought mattresses at a department store wouldn’t do it again. Selection and service don’t rate highly, so proceed with caution unless you’re getting an amazing deal as they turn over inventory in May.

Buy Items on Commission, Not Items at the Front of the Store

The fancy department stores like Nordstrom’s and Sax employ many salespeople who earn a commission for selling you high-end clothes, but lots of regular department stores still use a commission model for shoes, jewelry, cosmetics and some big ticket items. While this can lead to pushier salespeople, it may also give you some wiggle room to negotiate the price — especially if you’ve been taking up a lot of the salesperson’s time. Ask if they can give you a discount, and they may just do so in order to make the sale.

On the other hand, department stores don’t have uniformly good deals across the sales floor. In an effort to keep the newest — and most expensive items — in your line of sight, these items are usually placed at the front of each section. Clearance items and other markdowns are buried at the back of the store, so start digging to find the best deals.

Traditional department stores often get a bad rap for being overpriced, but you can find good deals if you know where to look. Because they now face so much competition from discount stores, dollar stores and online retailers, they have to cut their prices to stay in business. That’s good news for savvy consumers, so stick to the smart buys when you wander into a department store on your next trip to the mall.

Of course, it should go without saying that you should never, ever pay full price for something at the department store. Retailers know consumers are expecting sales, so they have a lot of them. Check online or look for old-fashioned newspaper circulars that let you know what’s on sale when, and add on coupons if you have them to get deep discounts on your purchases.

Do you have a secret weapon for shopping at department stores? Share your strategies in the comments!